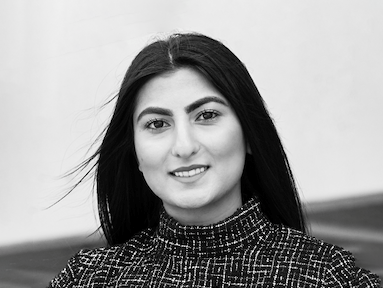 Farkhunda Muhtaj is an Afghan-Canadian professional footballer and social activist. She is the Captain of the Afghanistan Women’s National Team and plays for Fortuna Sittard in the Dutch Eredevisie. In 2021, she played an instrumental role in the evacuation of 300 + Afghans including the Afghanistan Youth National Team to Portugal after the Taliban regime came into power in August. She continues to be heavily involved in their academic and athletic pursuits and hopes that they will be positive role models for other young women and girls globally.

Muhtaj earned two degrees from York University; a BSc degree in Kinesiology and Health Sciences (2019) and a B.Ed degree in Science and Physical Education (2021). She captained York University’s Women’s Soccer Team and later joined the York Lions as an Assistant coach after spending 5 seasons as a player. She has won many academic and athletic accolades each year. Most recently Muhtaj was recognized as a Top 30 York Alumni Under 30 for her active dedication toward social justice.

Muhtaj was one of thirty female leaders in football invited by FIFA – UEFA to participate in the 2022 Women in Football Leadership Development Programme in Switzerland. Muhtaj is committed to developing and implementing sustainable humanitarian and sport projects locally and globally to help advance equitable and diverse opportunities for refugees and newcomers, women and girls, and underserved communities to feel empowered and become impactful leaders.

She is the co-founder and director of Scarborough Simbas, a non-profit organization that uses sport to help ease the settlement journey of refugees and newcomers to Canada. She also serves as a humanitarian ambassador for Penny Appeal Canada. Where she helps spread awareness on humanitarian issues globally.

Muhtaj is an active member of Common Goal’s Anti-racism project, a reputable organization committed to tackling social challenges through football. She hopes to use her platform in sport to help work toward the United Nations social development goals. She also serves on the board of Common Goal’s Quality Seal Committee.

She is also an Ashoka Fellow and INKey List Global Changemaker and Impact Fund leader. She is currently working on searching, selecting and supporting impact projects that will create positive change around the world. Specifically, she is committed to supporting innovative projects globally to help advance equitable and diverse opportunities for refugees and newcomers, women and girls, and underserved communities to feel empowered and become impactful leaders.

Muhtaj recently joined Respect Group as the Director of Conscience and Culture. Her goal is to ensure that our environments are safe from bullying, abuse, harassment, and discrimination and that everyone can truly thrive in while embracing their unique self.

She has been invited to many notable international conferences to speak on topics including, women peace and security, global active citizenship, solutions to social justice issues and women’s football. She had the incredible opportunity of being the Canadian Ambassador for a Day under Canadian Ambassador Lisa Rice Madan at the Canadian Embassy in Portugal.

Muhtaj is an OCT certified teacher and was teaching Science and Physical Education at a high school in Newcastle, ON prior to relocating to Portugal in 2021 to support the Afghan refugees with their settlement.